Today, the Indie Showcase welcomes Imogen Matthews, with a story of a change in genre.

The Hidden Village – a forgotten piece of WW2 history 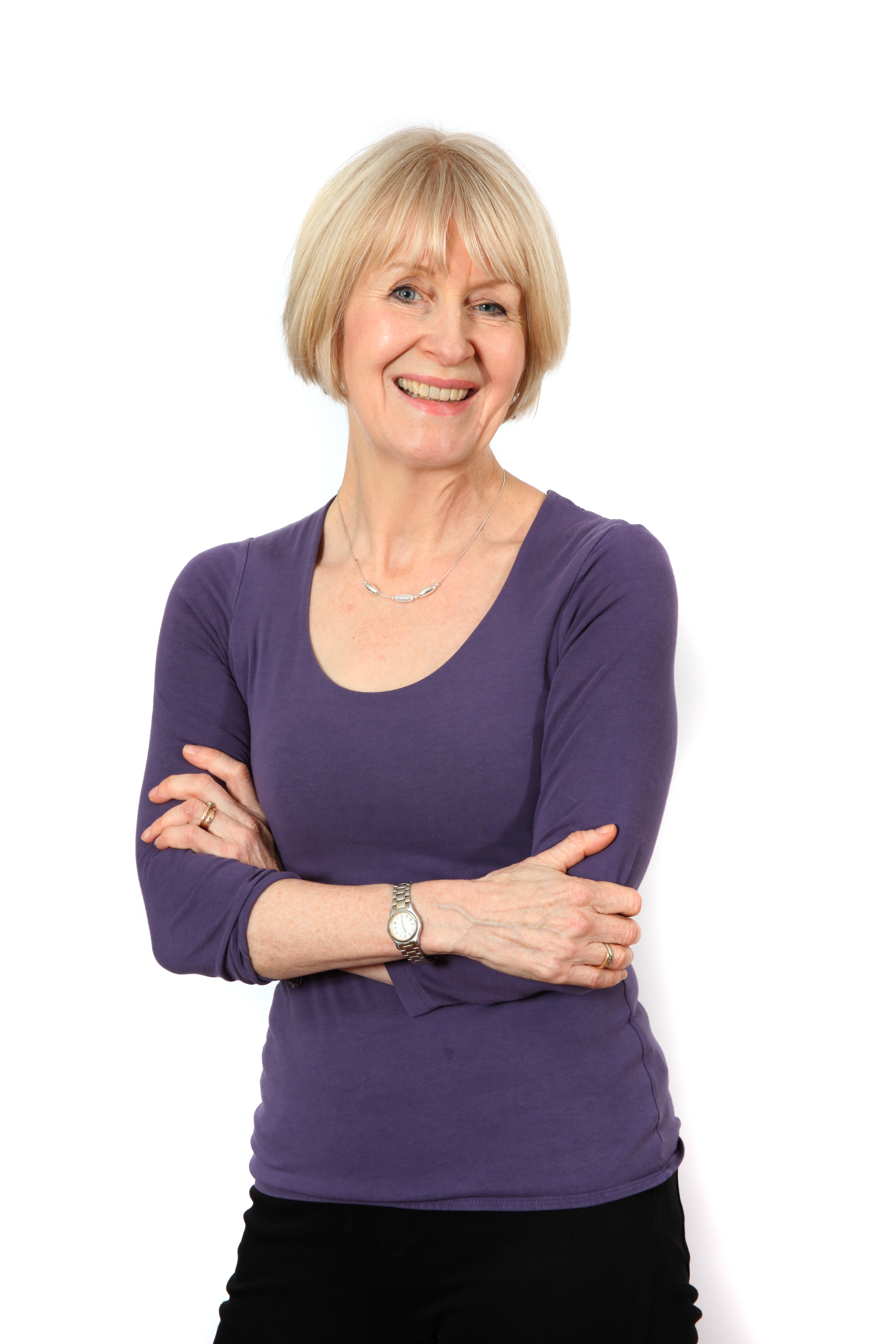 Just over a year ago, I was a self-published author of Run Away and The Perfume Muse, both contemporary fiction books written under my pen name Alex Johnson. Like so many authors, I’d be lucky to get a few sales on Amazon, even though the reviews were all pretty good. I kept on writing, because I loved it, not because I expected to be a successful author.

Everything changed with my next book, The Hidden Village. It’s a historical novel set in WW2 Holland in a place that very few people have heard of. That place is the Veluwe woods, which I’ve visited on family cycling holidays for 28 years. 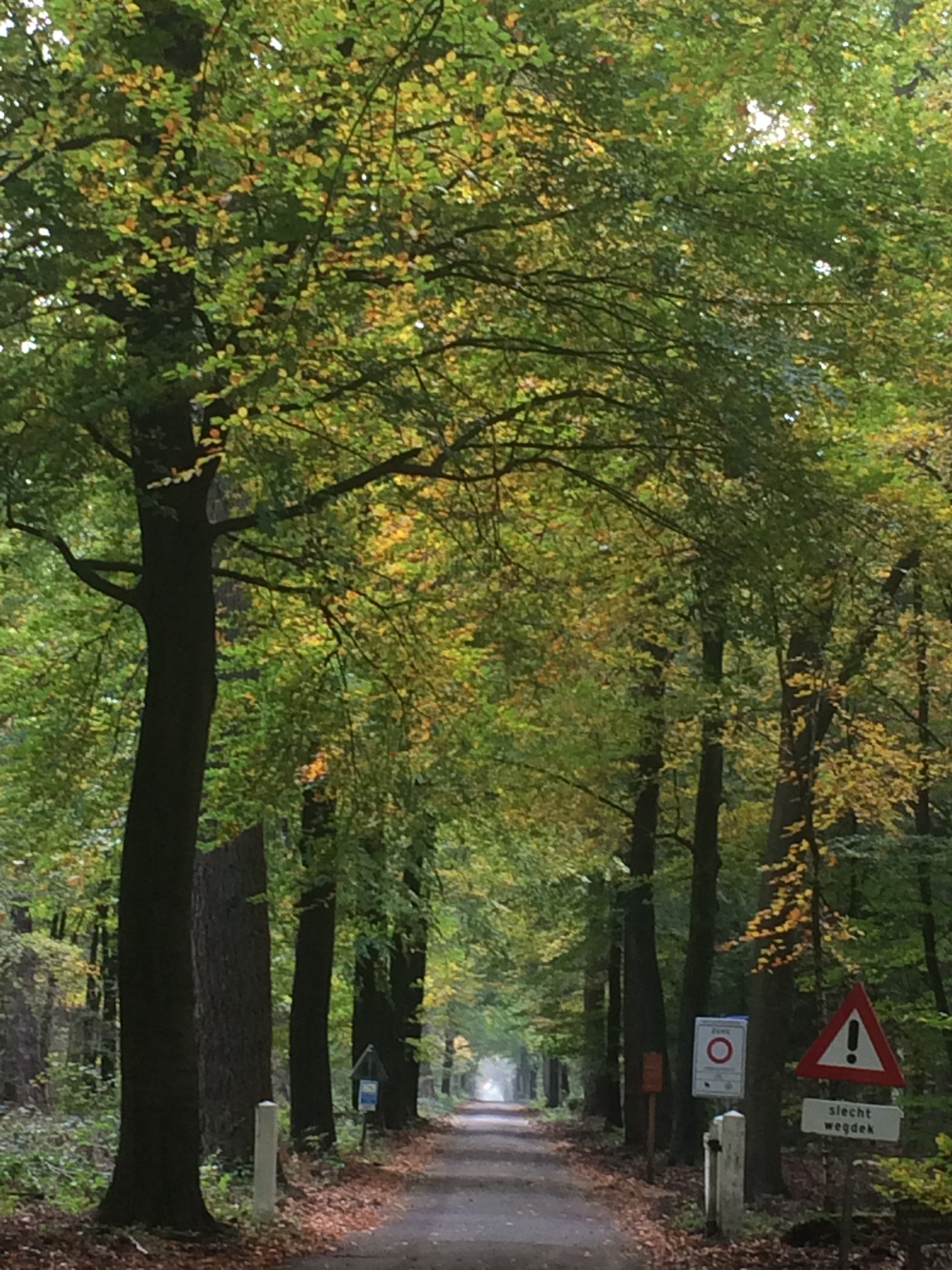 Cycle path in the Veluwe, Holland

I also had another very personal reason for writing The Hidden Village. When I was a child, my Dutch mother would often recount her stories of life as a young woman under the German Occupation in Holland. Despite the increasing hardship and depletion of food supplies resulting in near-starvation (The Hunger Winter occurred during the winter of 1944-45), she spoke of her adventures and terror mixed with excitement in evading the Nazis. It was only when she reached her nineties that I thought about writing these stories down. I asked her to write down her memories in her own words and asked her questions to help fill in the gaps. This provided me with enough material for a short memoir for the family – I had no intention of doing anything more than keeping a record for posterity.

Until one summer, when I was cycling with my husband along the beautiful cycle paths through the Veluwe beech woods and I noticed a large rock at the side of the path. It was a memorial to the local people from the nearby village who had help shelter Jews in a purpose-built village at this spot. 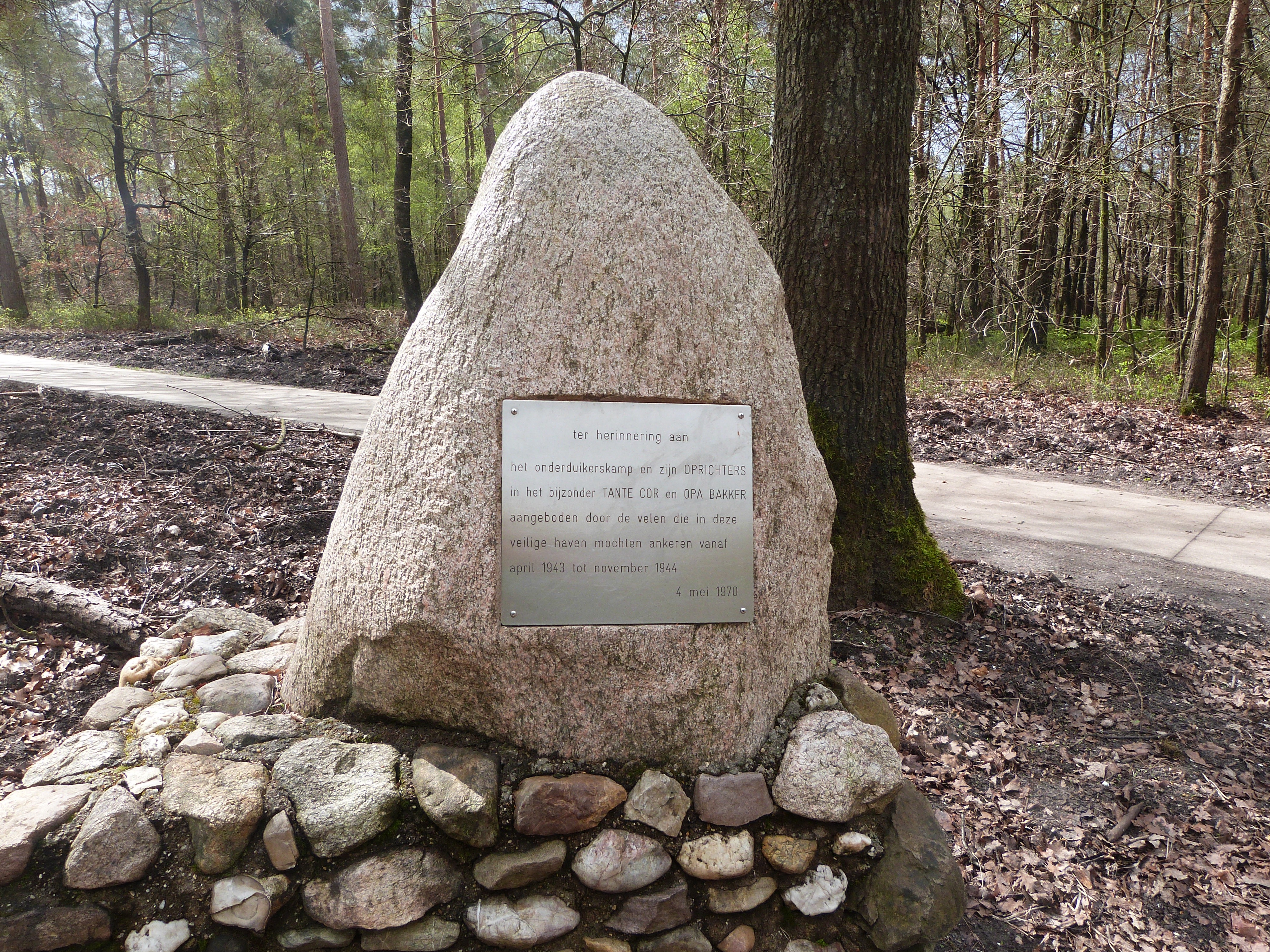 Memorial at the spot

where the hidden village

existed in the Veluwe woods,

We left our bikes near the memorial and followed a sign through the trees to Het Verscholen Dorp (Dutch for hidden village).  Ahead we found three underground huts, reconstructed to resemble the dwellings that housed nearly 100 people. In addition to Dutch Jews, there were people of other nationalities living there, including English and American downed pilots, a Russian on the run, a German defector and a number of Dutch men who refused to go and work for the Germans. 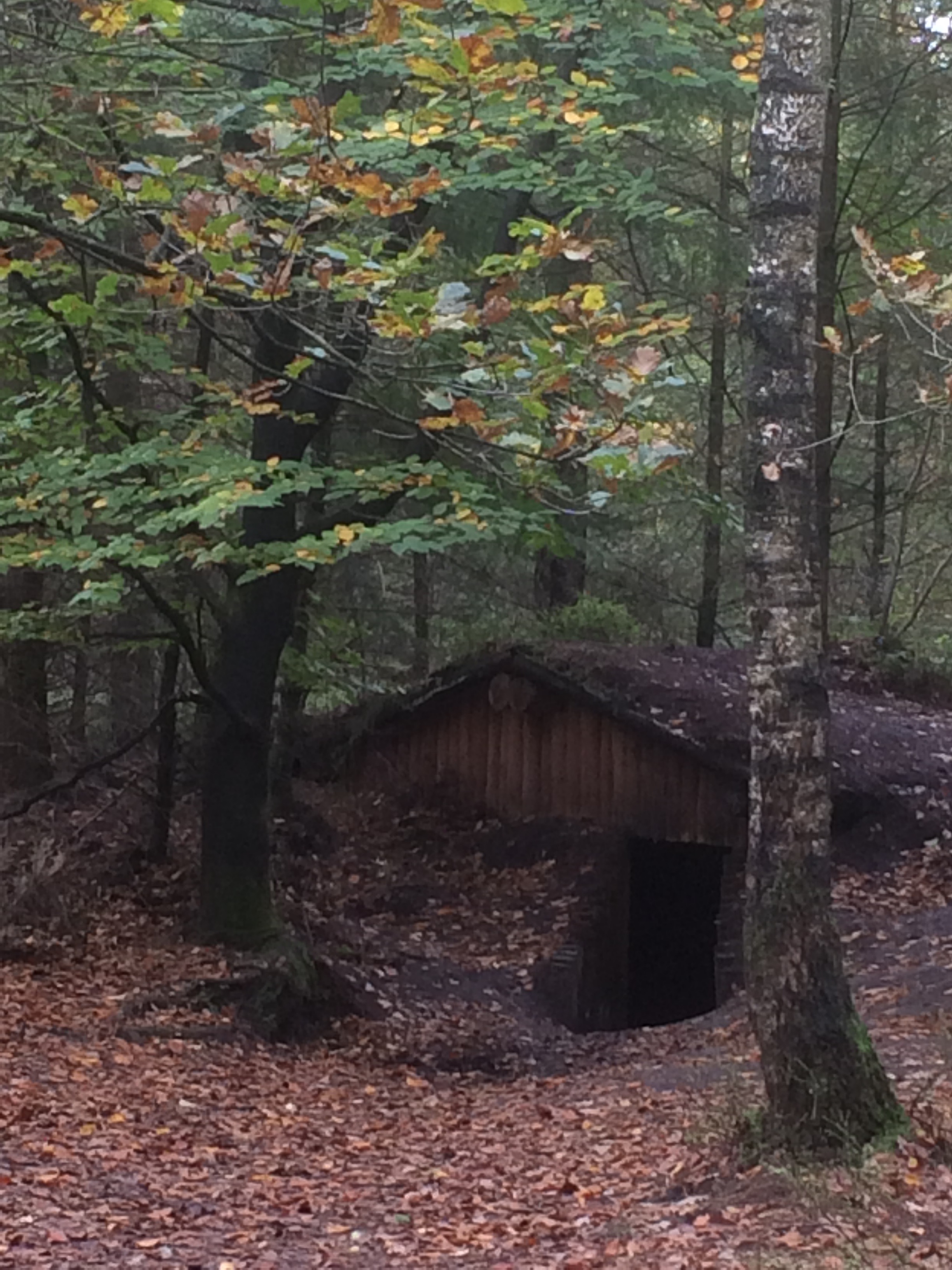 Reconstruction of an Underground hut

These huts were as dark and secluded as the one shown here, designed to be invisible to the naked eye. Whole families lived inside these cramped spaces and many were so relieved to have somewhere safe to live that they were prepared to put up with less than perfect conditions.

I came away tingling at my discovery. I was intrigued by how it was possible to hide 100 people for all that time, whilst providing them with food, clothing, medicines etc.

The idea of a novel was forming in my mind.

Back home, my research threw up little information about this forgotten place, which strengthened my resolve to write a story of my own. I was particularly interested in how young people would have felt and behaved: my two main characters are Jan, an 11-year old boy, who enjoys roaming the woods looking for adventures and fallen pilots; and Jewish girl, Sofie, a teenager who resents being torn from her family and friends and forced to live in an underground hut in order to escape persecution.

As the story was so personal to me, I wanted to publish it under my name and started to look for an agent/publisher. I had some interest from an agent, but it came to nothing (sounds familiar?) Then, one day on Twitter, I came across Amsterdam Publishers, an international publishing house based in the Netherlands, specialising in WW2 fiction and Holocaust memoirs. They asked to see the first three chapters of my novel. I was delighted when the owner, Liesbeth Heenk, came back almost immediately wanting to read the whole manuscript.

That was last year in January 2017 and things started to move fast. The Hidden Village was published as an ebook on Amazon in May. Shortly after, the paperback appeared. With an international publisher behind me, I didn’t know what to expect and wasn’t prepared for the sudden surge in interest for my title in the US. The book rose rapidly up the rankings and by the end of June was #1 in no less than 5 US Amazon sub-categories. It’s also become a bestseller on Amazon UK and sells strongly in Canada and Australia. 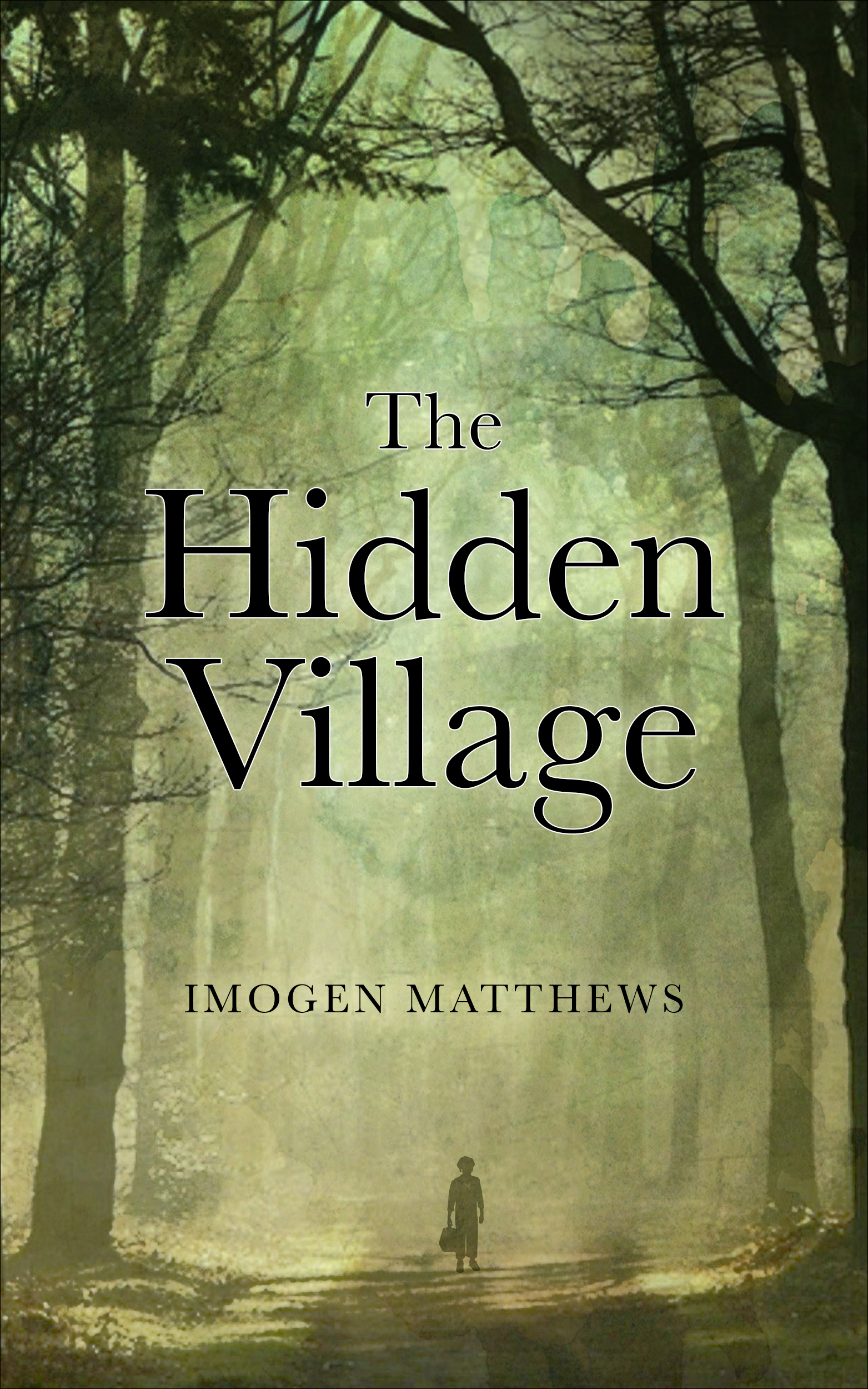 Earlier this year, I took another step along my journey by working with Essential Audiobooks to produce an audiobook version of The Hidden Village. I was fortunate to be able to link up with a professional actor and voiceover artist, Liam Gerrard, who has brought my words to life in a way I hadn’t thought possible. It’s a very strange and wonderful feeling, hearing the words I’ve written being narrated. Liam added layers of meaning and tension to the story I honestly hadn’t realised were there. 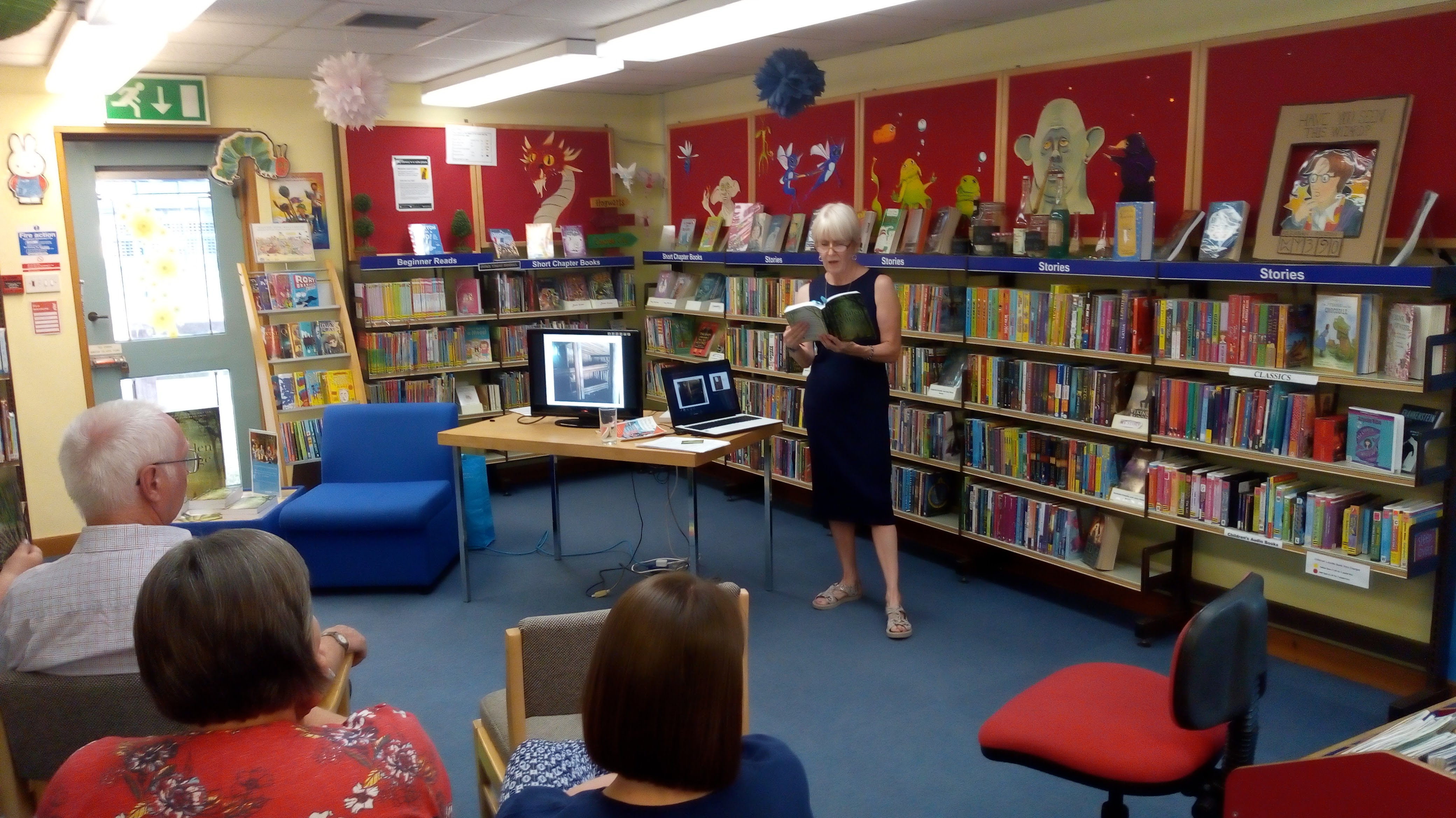 Meanwhile, I continue to get the word out about my novel and library talks are a big part of my book promotion. I’ve been asked to give talks in a number of Oxfordshire libraries about the inspiration for my writing, the most recent, featured above, at Carterton library.

But I haven’t stopped writing contemporary fiction and have a further novel on hold while I concentrate on fictionalising little-known events from history.

You can take a look at my work here:

The Hidden Village audiobook is available on Audible and iTunes.

Thanks for a great post. I hope you all enjoyed it.

To learn more about the author, please visit www.imogenmatthewsbooks.com