My next novel, Andorra Pett on Mars will be published on 30th April. This is an auspicious date for me, it’s five years since my first novel Freefall, was published.

Pre-orders are already live on Amazon at https://www.amazon.co.uk/dp/B07CGQG86T

The printed proof is on the way, once I have that and it’s been checked I can order a box for my launch event.

That will be at Liznojan Books in Tiverton on May 11th, here’s the poster, I will be reading from the book and talking about Andorra. 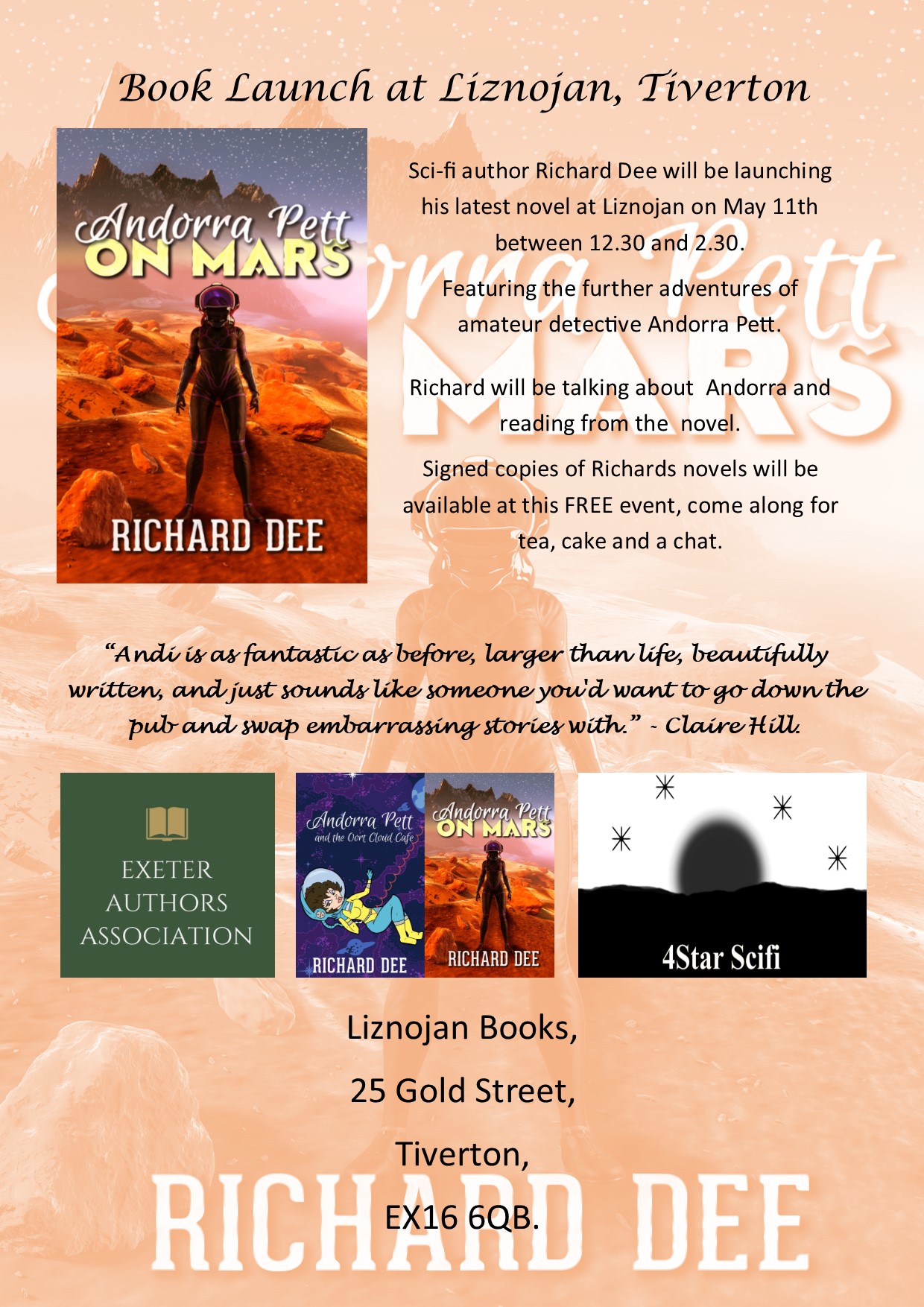 Meanwhile, the Andorra Pett series continues, I have a pretty good idea of what she will be getting up to next, I’ve included the start of the next adventure at the end of Andorra Pett on Mars. Not giving too much away but Andorra meets up with her estranged sister and the usual mayhem ensues.

There’s so much to do in the last few days before you launch your book. I’ve been checking the final proof versions of the print and eBook before uploading them to the printers and distributors, there are always last-minute things that you never noticed before. Adverts have been running and hopefully, things will soon start to settle down.

I’ve been thinking about where I go next, my thoughts turned to a project that I started a while ago. At first, it was really only intended to give some background and realism to a future that I had created, to justify the role of a planet in the story, and to reveal a secret.

I’m referring to something that I called Galactographic Magazine. 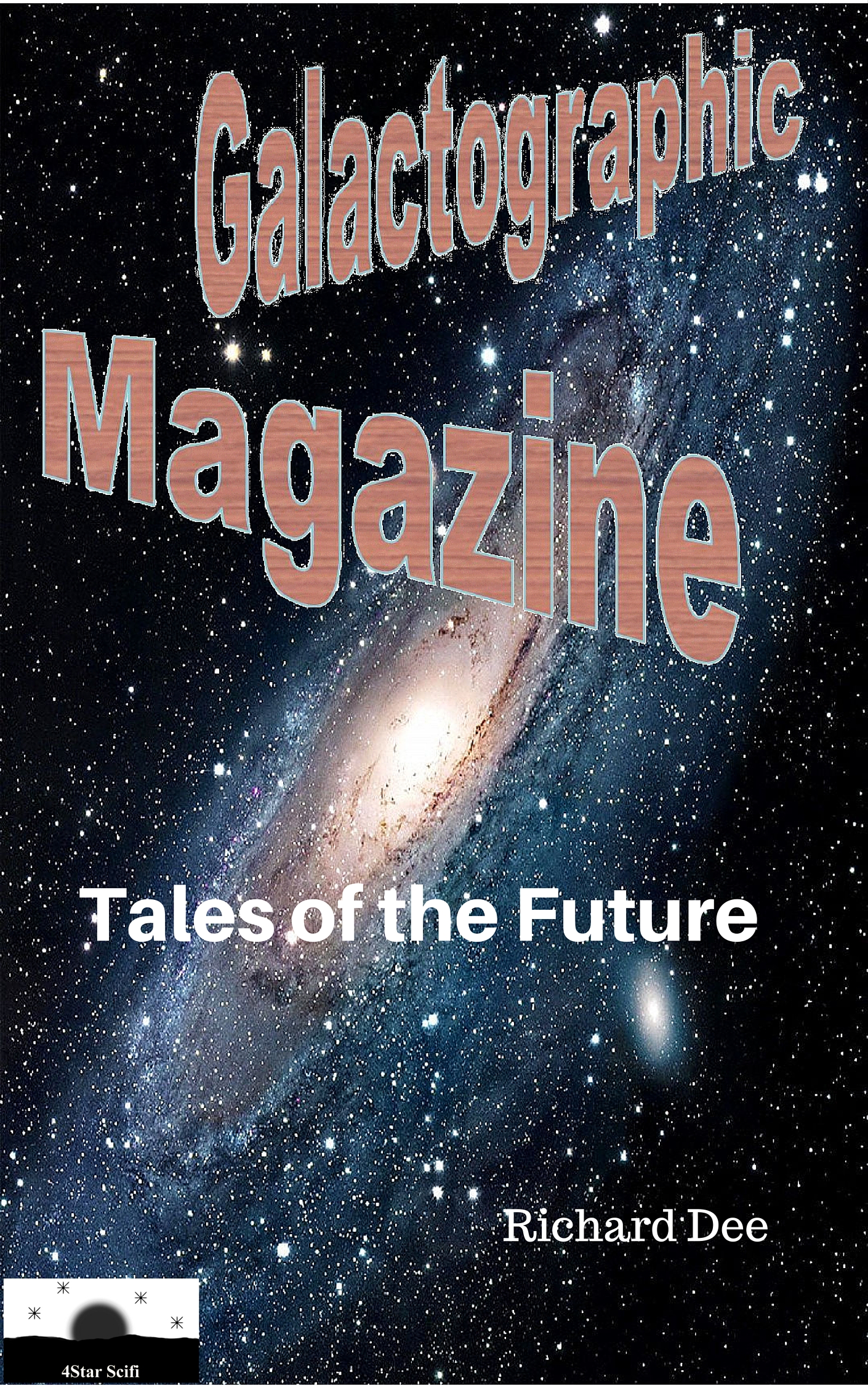 Then, I realised that Galactographic magazine and its founder; the intrepid explorer Ballantyne Alysom, could be so much more than that. In the same way that Asimov used the Encyclopaedia Galactica in the Foundation series, I could in effect write the history of the future through its pages. Not only that, I could use it to pull together all the strands of my universe, it could become the launch-pad for stories going backwards, forwards and sideways, there was no limit to what I could do with it. As a first step, I wrote a short piece, where I started to develop the idea. I also used the magazine as a basis for my (as yet unpublished) novel Survive, but more of that later.

I even went to the trouble of designing a rough cover.

Here’s the original piece from 2014, the genesis of the idea.

Looking back at our Future.

In the last 5000 years, many civilisations have grown and flourished. Some we know a lot about, Greek, Roman, Aztec and some we know little of, Minoan, Olmec and that other one that nobody can ever remember. And that’s just on one planet. And there are almost certainly others that we know absolutely nothing about; they vanished taking their knowledge with them. And yet, they existed.

And that got me thinking; in the future, I’m sure that we will finally set out into the galaxy. Each planet that we colonise will be like one of the old civilisations, it will develop and flourish, or it will fail and decay. Given that we will take all our human emotions and vices with us, the future will probably be as exciting and difficult to predict as the past.  And who will know or remember after 5000 years of Galactic colonisation, which planet was first, or what it was like? Will we be scrabbling around in the dust of a ruined sarcophagus or chipping pieces of plastic from under a mountain of rubble? Lifting broken laptop computers to the sky and muttering “Hmmm, it must have been a ritual object?” As usual human nature will ensure that history will be written by the victors and the past will be modified to fit the prevailing political and cultural mood. War, natural disaster, isolationism and religion will also colour memories and turn facts into legends.

With this in mind, I imagined myself 5000 years into the future, turning around to look into the past. To help me, I devised a magazine, Galactographic. I saw it as a grown-up descendant of something like National Geographic, a magazine which would seek out the most interesting items of Galactic history, nature and science for its articles.

As an introduction, I wrote an editorial from the point of view of the present editor. I made Lev Alysom a descendant of one of the legends of Galactic exploration, the one mentioned in my novels. I wanted the editorial to set up the idea that what we know as certainty may not survive to be history for our children.

This is what he said.

Where did we come from?

It’s a very emotive question and one that every citizen is asked at some point. If you’re a seasoned traveller you probably get asked it a lot.

In these enlightened days, it’s not supposed to matter if you’re ‘Old World,’ ‘New World,’ or if you come from the chaos of the slums of Thall because we’re all citizens of the Federation. The official line is one thing but of course being human we feel the need to belong, we like to have an identity. And to be able to say ‘My Planets better than your Planet’ to anyone who is listening.

So, if you hail from Wishart or Tauro or Callo you can be assured people will mutter ‘Old World,’ in a slightly jealous and deferential way. Reply Nara, Beldix or Agamen and eyes will roll, you’ll be expected to be uncivilised and provincial.

So that’s where you come from, where WE come from is slightly harder to define.

We’re all ‘New World’ really since all of us were born on a world that was not the origin of our species. Some of these worlds are ‘Older’ than others, that’s inevitable but none of them are the ‘One.’

And where was it? We know through universal legend that it was called ‘Earth’ and we know it was in Sirius somewhere but that’s about it. To explain why we don’t know any more we need a brief history catch-up.

In the days of the First Federation, the Capital was a place called Brethren’s Host on Wishart. The first Federation was a quasi-religious society with a single deity and a rigid structure. Inevitably there were tensions and what we now know as the Holy Wars were the result.

When Brethren’s Host was destroyed all of the central records of the past were lost. We can only speculate on what they contained. It was one of the most devastating losses of the wars. (And that’s saying something)

In the aftermath, planets were given a choice, join a new federation, a looser and less restrictive one or continue in religious harmony. It was a pity no-one had thought of that before the killing started but when mankind moved into the Galaxy he brought all his faults with him. The result was the formation of the Second Federation and the Coalition of Independent Worlds (Proving human nature again, the restrictive religious one was called the Independent Worlds, as if to convince the populous). The new Federation was less authoritarian and desperate not to make the mistakes of the past.

Obviously, we can’t tell what knowledge from before the Holy Wars survives on the Independent Worlds since few of us ever go there (or return) but here we are left with contradictory remnants. It seems however that to ensure less tension no effort was ever made to rebuild a collective memory in our part of the galaxy. The very idea was seen as stirring up trouble.

With no requirement to do so, no planet really likes to admit that it’s not old and cultured if it thinks it can get away with it and any suggestion that it may be the oldest is promoted. Hence everywhere now claimed to have been settled directly from Earth although no records existed. Time passed, nothing was done to correct this, mankind muddled through and in the end, the truth was lost in the fog of boasting.

The trouble this caused and still causes in the scholarly world is immense. Historians just want the truth and short of going to every world and digging holes, it’s difficult to separate the facts from the hype. Sirius being in the Independent Worlds sphere of influence doesn’t help either.

For all we know Earth is flourishing in their midst, again the popular line is that it must have been destroyed as it’s not in the Federation.

The most important fact that it shows is that even though you would expect not to be able to lose a Planet, it happens.

I know that ‘Galactographic’ is seen by people all across the Federation, someone, somewhere must know the one thing that we need to complete our search. So, I appeal to any readers to get in touch if they think they can help us.

Back in our own time, I hope that after reading the problems of an eighth-millennium explorer you can see that they are no less than those of Columbus or Cook or Cortez.

Things disappear despite the best efforts of everyone and although it is said that nothing disappears without a trace; when there is no desire to remember, people forget.  Or maybe not, after all the official line and the personal memory are very often two different things. Perhaps Lev will get his answers and make some progress, just like the ancient civilisations on Earth were found by the intrepid and dogged explorers of our time.

Galactographic is an idea that I’ll be revisiting.