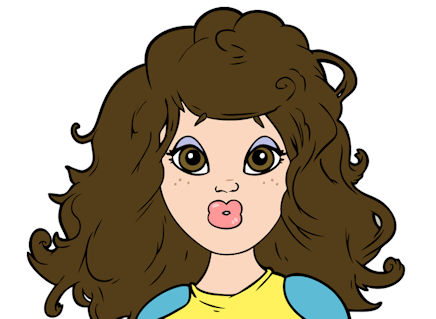 I know I keep on about Andorra Pett but here’s the thing.

She’s my favourite character, out of all the ones that invade my mind.

And to think she started out as the result of a challenge.

My wife suggested that I try writing a Sci-fi story with a female lead.

As I had three daughters, I thought that their lives would provide me with enough insight to be able to construct a believable female character.

I wanted to write something that was a bit lighter than the things I had been doing, which were at the harder end of the genre. I thought about it and given my love of puzzles and clever twists, I decided to make her an amateur detective.

At the time, my wife was reading a book set in a beach café in Cornwall. The connection was obvious, put a café in space and get my new character to run it. I could give her a tragic past, enough reasons to head away from it all, surround her with a cast of eclectic types who all might be doing the same thing. And add someone who was up to no good.

The lightbulb moment was realising that, when we move out into space, we will take all our earthly trappings with us. All our vices and emotions will play out, even in the cold of space, wherever humanity gathers in groups to explore and survive.

When the time comes, people will go into space for any number of reasons. As well as the out and out explorers and thrill-seekers, there will be those looking for a new start, those with things to hide and those running from something. Not forgetting the ones who want what you’ve got.

So the scope for crime, revenge, opportunism, whatever, will always there. Because space is a dangerous place, there will also be the fact that anything that happens could easily look like an accident. Crucially, in such a closed environment, there is nowhere for a perpetrator to hide. Which means that they would have to be tricky. To catch them would need luck or skill.

Who better to do that than someone who was routinely underestimated?

The rest, as they say was easy.

Initially, to satisfy the challenge, I wrote a short story. This was well received, people asked me for more. In 2016, I expanded this story into not one but two novels, Andorra Pett and the Oort Cloud Café and Andorra Pett on Mars, which I wrote back-to-back.

While I was doing that, I had ideas for further adventures for Andorra, which became Andorra Pett and Her Sister and Andorra Pett takes a Break. I also wrote a short story about her early life, called Are We There Yet? It was based on family holidays and I tried to include a Scooby Doo-style element of fun.

The thing is, I’ve come to a point where I’m torn between continuing with Andorra or passing her baton on to a fresh voice.

I would hate the series to become stale and simply go through the motions ad nauseam, so injecting a new perspective seems like the way to go.

Unless I have another idea.

Hence you might be seeing her great-granddaughter, Faye Masters, take over the crime-solving mantle. And her first job will be to solve Andorra’s last mystery.

Whatever happened to Andorra Pett? is in the early stages of development.

Welcome back to another blog hop, with #OpenBook. Here’s this week’s prompt. What’s something you...

I don’t know if it’s the weather, the choice that’s available or the simple fact...

Welcome back to another blog hop, with #OpenBook. Here’s this week’s prompt. Write a scene...

Here are the first few paragraphs of another idea I’ve had. It’s for a new...

Welcome back to another blog hop, with #OpenBook. Here’s this week’s prompt. Is there a...

I do love a grand adventure, and the Steampunk genre gives me the perfect opportunity...