I thought that I’d post something different this week, just to show that I’m more than an author. Anyone who knows me will tell you that I’m also a bit of a foodie, with a particular liking for proper bread. So much so that when I retired, I opened and ran an organic bakery for a while, supplying cafés and shops in Torbay with bread and biscuits.

I’m a firm believer in bread with no additives. My sourdough had three ingredients, flour water and salt. The yeast comes from the air.

The recipe I’m sharing with you today utilises the greatest thing you can give dough, TIME! Time lets the flavour develop, you can also use less yeast (if it’s a yeasted recipe), as it has longer to work. The time also allows for various chemical reactions, making it easier to digest. For an article about the benefits of sourdough and slow fermentation over commercially produced bread, click here for an excellent explanation by Vanessa Kimbell.

It’s a simple recipe, for anyone who fancies fresh bread but doesn’t think they have the time or the skill. It’s an ideal project for a weekend as you start on one day and finish on the next. The rising time is not critical, as long as its more than twelve hours and less than twenty-four. All you need is time, a large plastic container with a non-airtight lid and a heavy casserole dish (like a Le Creuset), of about two or three litres capacity. The one I use is 2.5 litres (4 pints).

The recipe is based on several ideas that you can find online, I’ve played around, modified them slightly and ended up with this way of doing things.

You need 500g Strong White Flour, 470g cold water, 4g instant yeast and 9g salt. It might seem like a lot of water but don’t worry.

Just mix everything together in the plastic container and cover it loosely, the action of the yeast will blow a tight lid off. 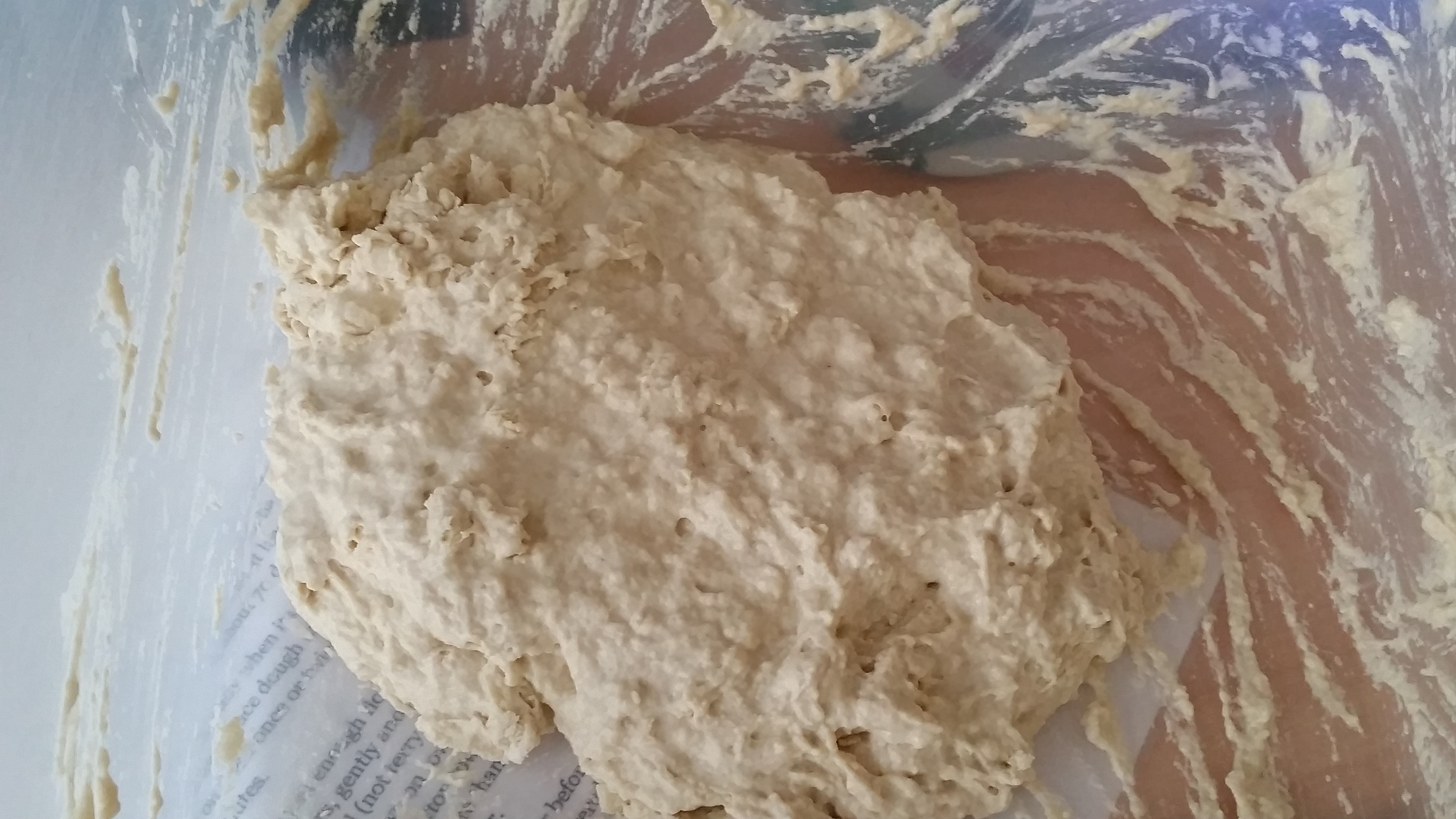 Leave it in the kitchen, the pictures below are after 18 hours. 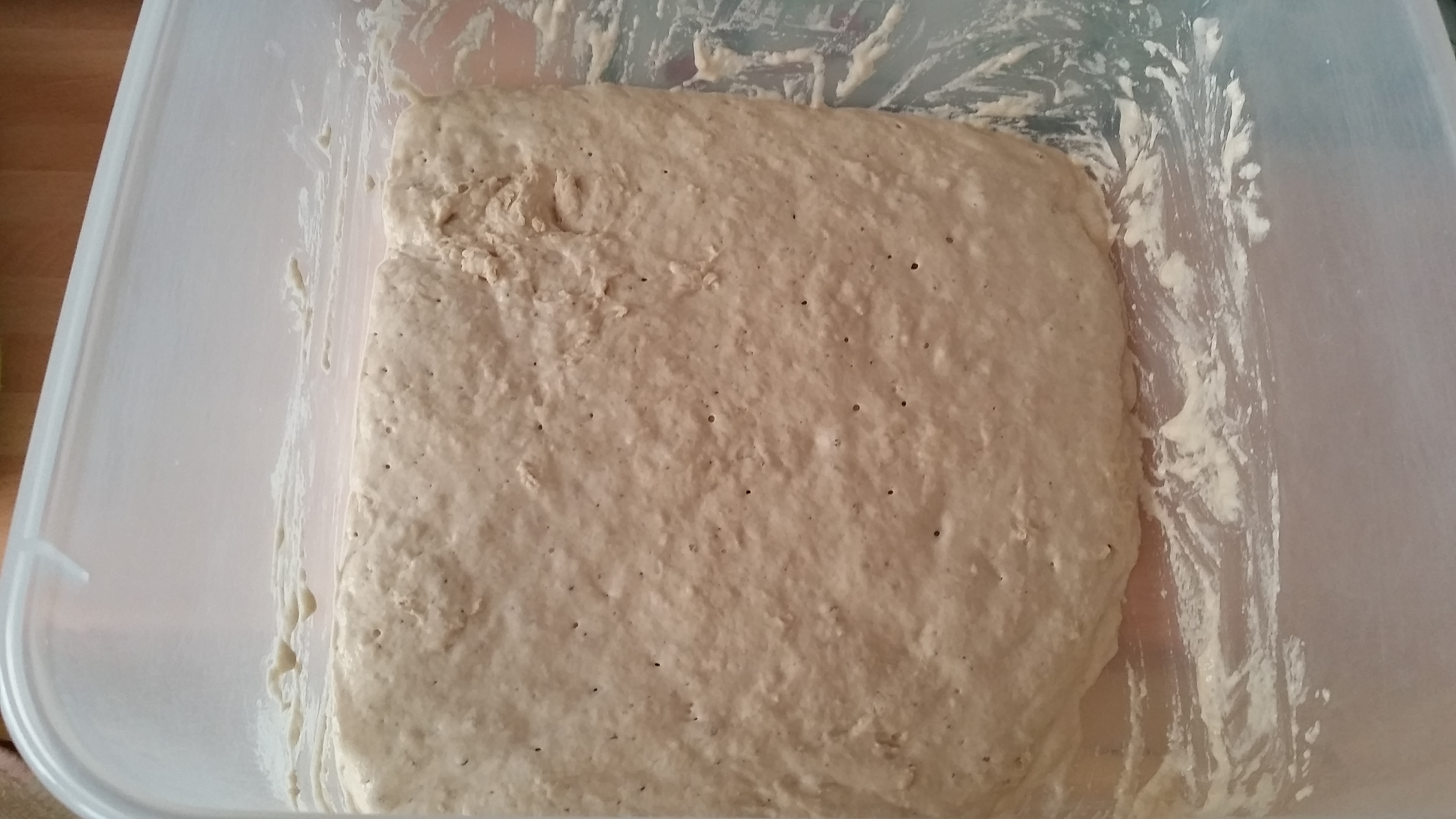 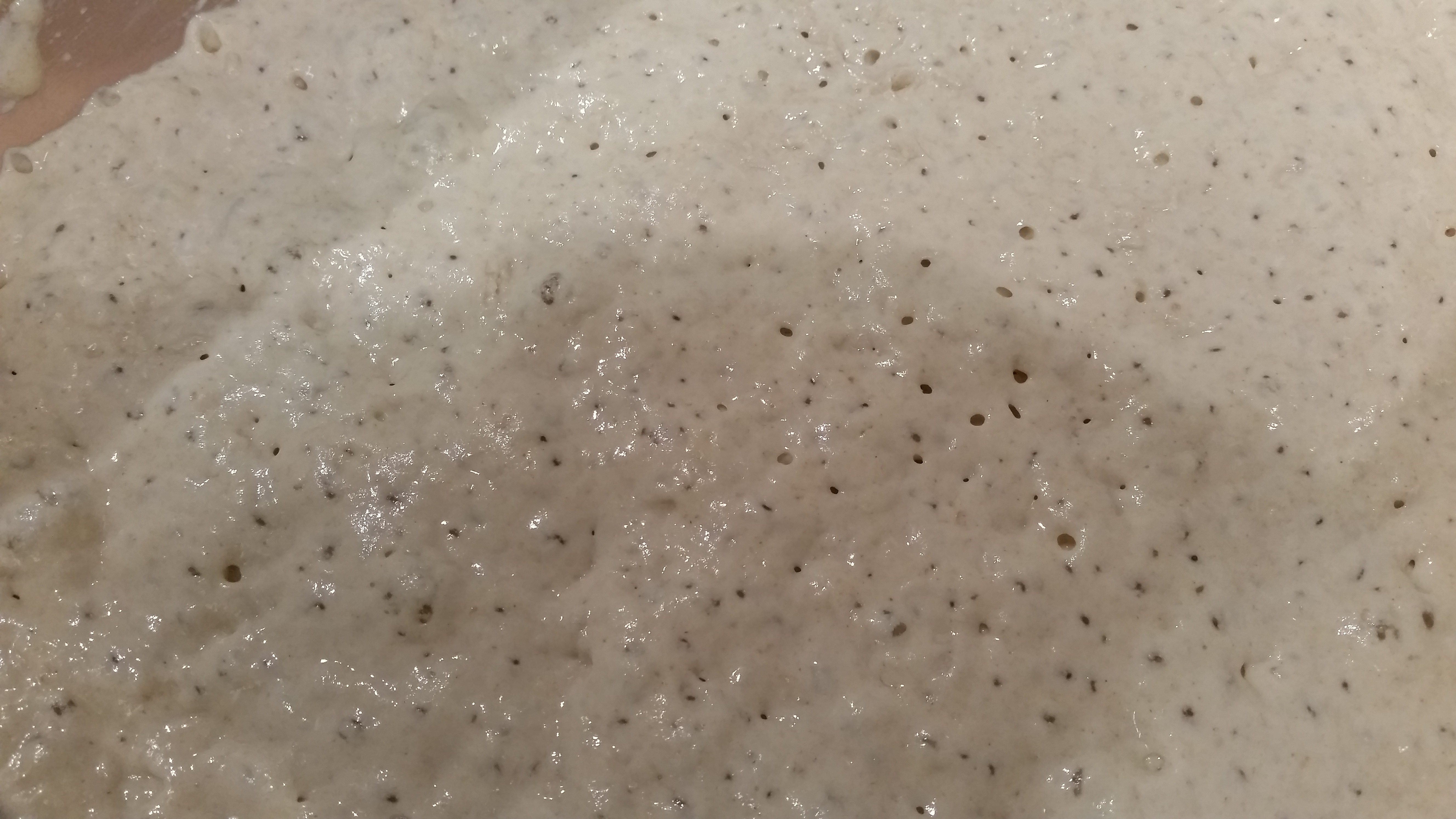 As you can see, after that time its fermented nicely. It will also smell amazing!.

Now you just have to fold it into a ball.  You need to get your hands into the dough at this point. Turn it out onto a lightly floured surface, Pick some of it up and gently stretch it, without tearing. It will be loose and soggy. Fold your handful over the rest. Move around 90° and do it again. When you’ve done a circuit, turn the whole ball of dough over and do it again. The dough will start to feel stronger as you go around. Finally, shape it into a rough ball, flour it well and put it in a lightly oiled casserole. Put the lid on, you will be leaving it for two hours before you bake it, to give it time to rise again. 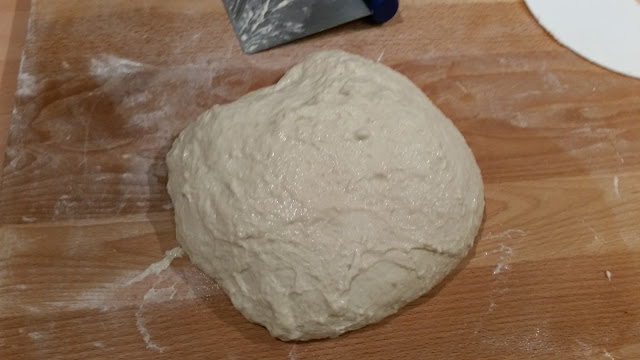 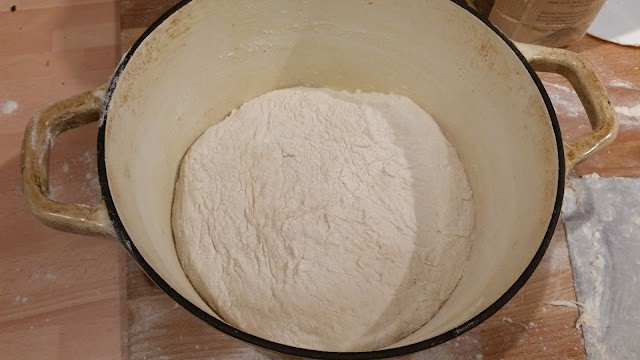 After an hour, preheat your oven to its maximum temperature.

After another hour, put the casserole in and bake for 30 minutes with the lid on, the excess moisture that was in the dough will be contained in the casserole, as it turns to steam it will keep the loaf moist and the texture open. 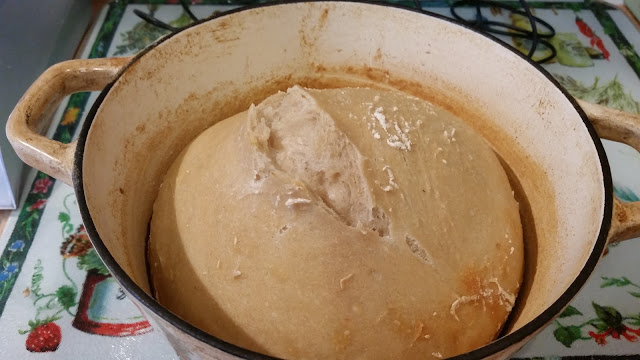 After 30 minutes, take the lid off, reduce the temperature to 220°C and give it another 20 minutes. This will crisp the crust. Take the loaf out and see if it sounds hollow when you tap the bottom. If it does, or the internal temperature is at least 95°C it’s done. If not, give it another ten minutes. 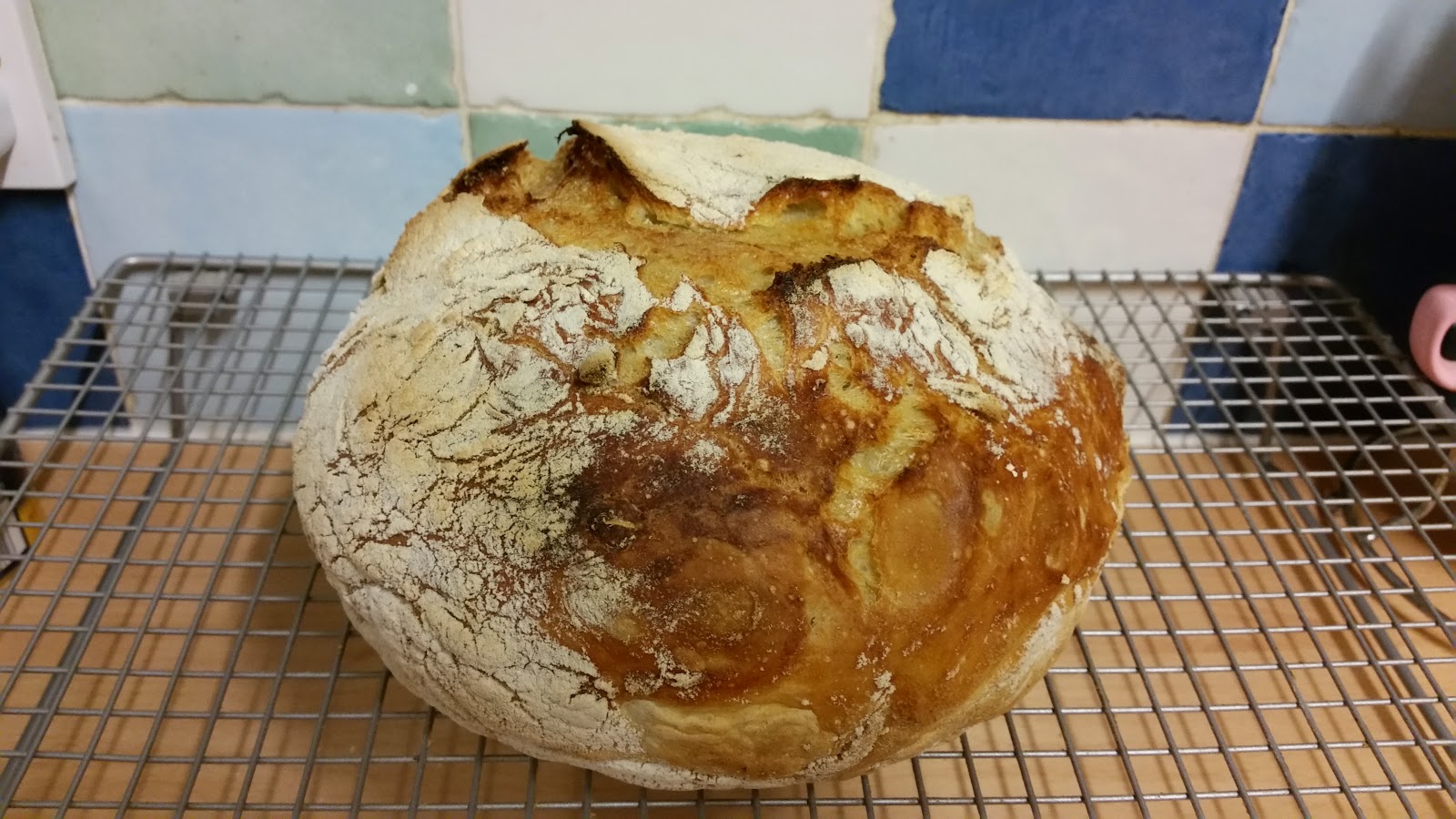 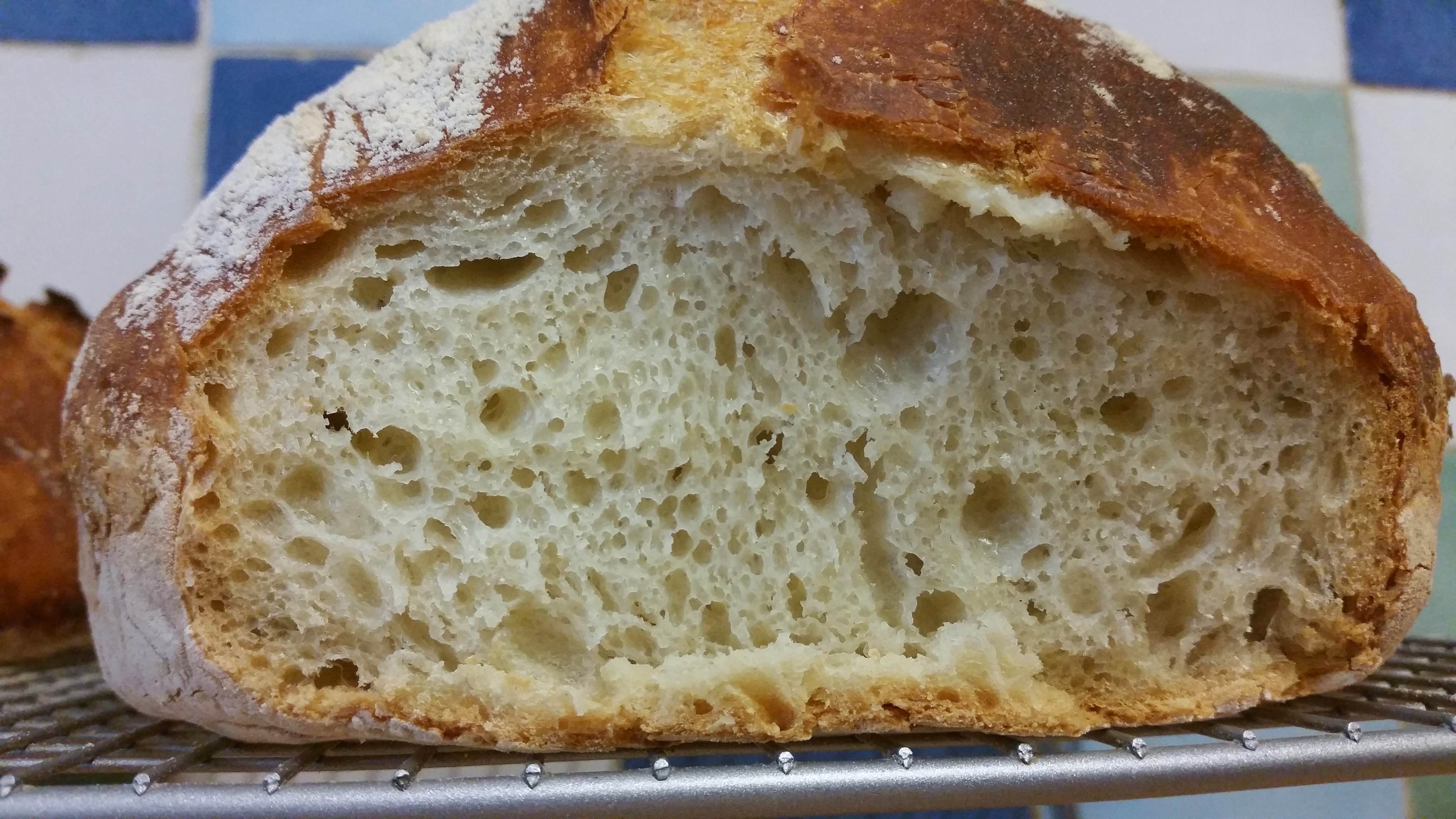 It tastes best while it’s still warm, but will keep for up to a week. Try that with your shop-bought loaf.

I’ll be back with another Showcase on Thursday, and a book review next Monday. Have a great week.