As it’s Bank Holiday Monday, I thought I would leave the writing behind and post about another passion of mine. Bread! 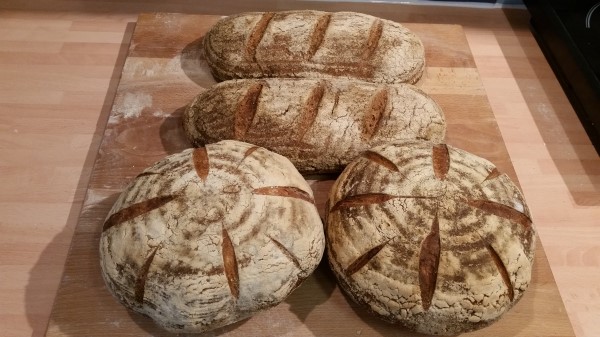 I love all sorts of bread, except the stuff that you buy in supermarkets that calls itself bread but is really only a load of chemicals in a plastic bag.

My basic bread has four ingredients, flour, water, yeast and salt. You don’t need any more than that. In the case of sourdough, you only need three. The yeast that makes the dough rise arrives automatically, from the air and the flour. Look at the label on a supermarket loaf and ask yourself why all the other things are there? In fact, I sometimes wonder if the rise in “gluten intolerance” isn’t more to do with intolerance to the chemical additives, and whether we’ve been fooled into blaming the gluten. After all, bread has been eaten for thousands of years, isn’t it strange that only now (when it has more chemicals added and is made so differently), that we’re having a problem digesting it?

Which is not to say that some people aren’t gluten intolerant, just that there seem to be so many more of them than there used to be when bread was made the old-fashioned way, before CBP and ADD (Chorleywood Bread Process and Activated Dough Development).

Rant over (for now), back to the story. When I first retired; for something to do, I started a bakery; in my kitchen. I made a lot of samples and went around pestering people. I ended up supplying quite a few shops and restaurants in Torbay with all sorts of bread and biscuits, both sourdough and yeasted. In the end, I became a victim of my own success, too busy with paperwork and not quite big enough to expand.

My exploits were chronicled in a blog, which you can find here. When I stopped baking commercially, as well as not getting up at half-past four every morning to get the oven on, I decided to keep my sourdough starter cultures going, so that I could still make proper bread for myself and my family, plus a few close friends.

A sourdough starter is so easy to make, just flour and water, less than five minutes work a day for a week and you can have your own. Once it’s established, you need to feed it once a week and keep it in the fridge. When you want to bake, take some of it out and wake it up. I have four, White, Wholemeal, Spelt and Rye. They’re all over five years old now and their flavour has developed in that time. They make different tasting bread than they used to, there’s a much deeper and more rounded flavour than they had at the start.

We must remember that, before the advent of dried yeast, all bread was sourdough. Here are some examples of what I used to make and sell, all made from a sourdough culture. 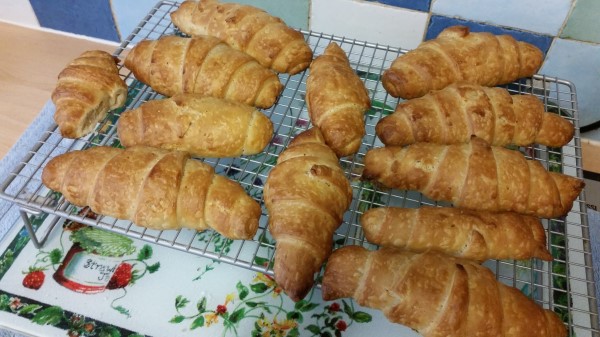 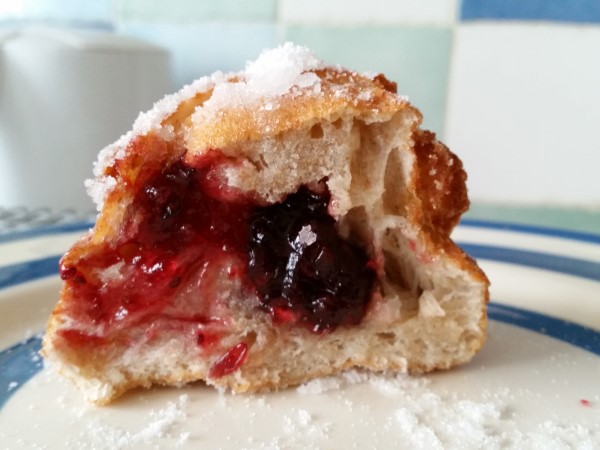 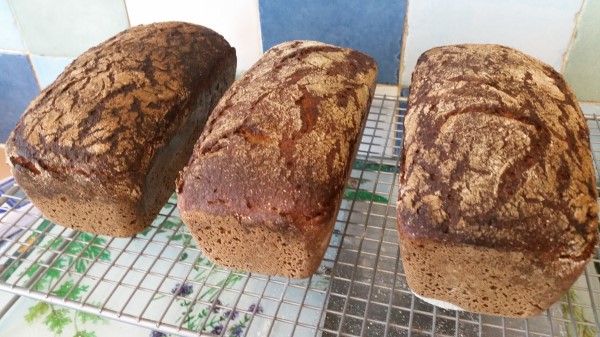 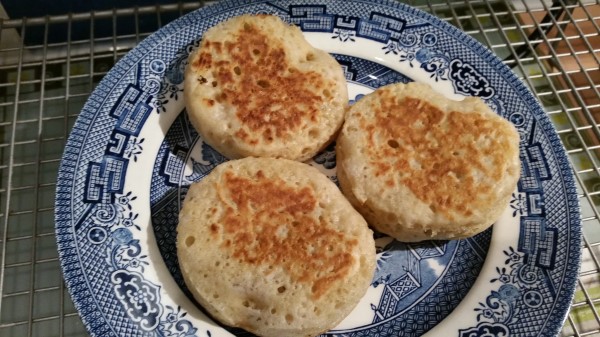 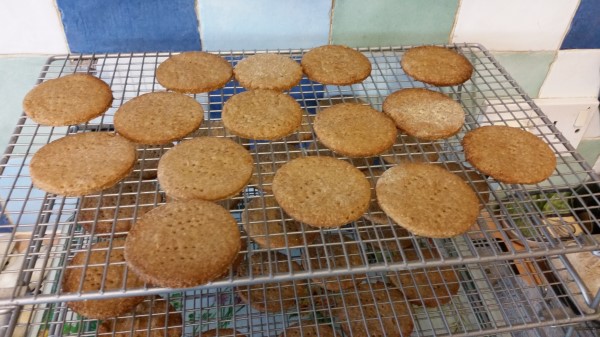 People will tell you that making your own bread is a time consuming and tricky business. That’s just not true, I use recipes that utilise the greatest gift to baking. The period from 8 pm to 6 am. That’s when the yeast gets to work and produces the flavour, while you get on with your life.

To give you an example, I started boosting some of my white sourdough starter on Monday evening, by Wednesday it was bubbling and ready to make bread. 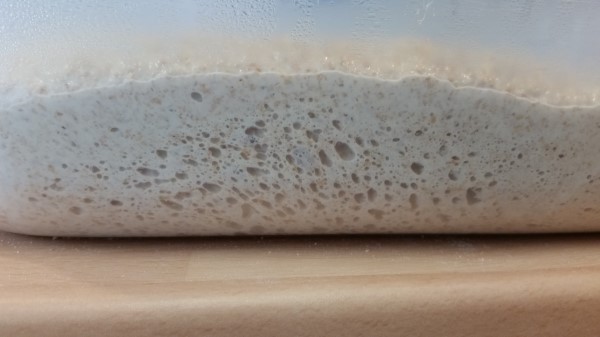 I made the dough at lunchtime, as I was in all afternoon. Like a lot of my recipes, there’s no kneading involved, just a bit of folding of the dough. The time and the yeast do all the work. Here’s what it looked like after I had mixed everything. 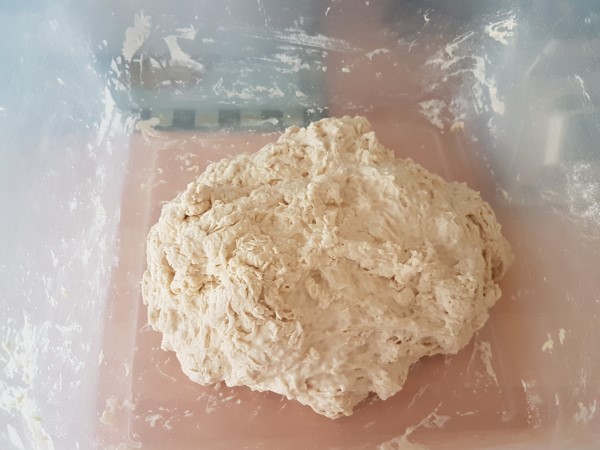 When I say folding, you pick up a piece of the dough, stretch it out and fold it over the remainder, rotate the ball of dough through ninety degrees and repeat, until you’re back where you started. Then lift the whole ball of dough and turn it over. It’s that simple

It took less than five minutes to fold the dough at 2 pm and 4 pm. It now looked like this. 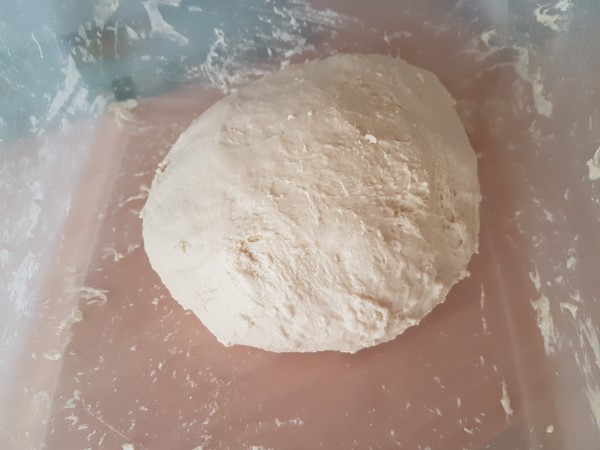 Then at 8 pm, I shaped the loaves and put them in the fridge for a rest. 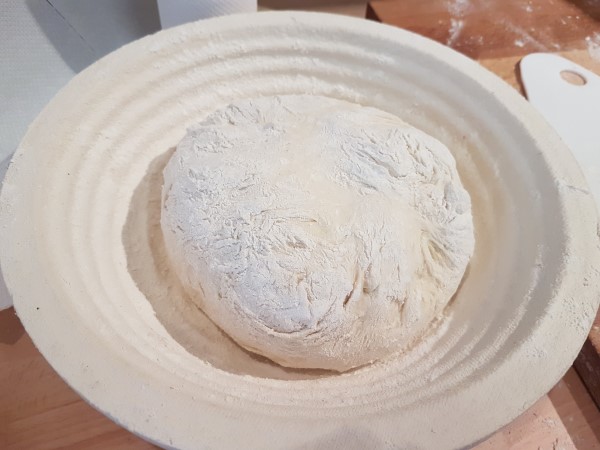 On Thursday morning, I took them out at 6 am to wake up the yeast and put the oven on. At 7, I scored them and baked them for 40 minutes. 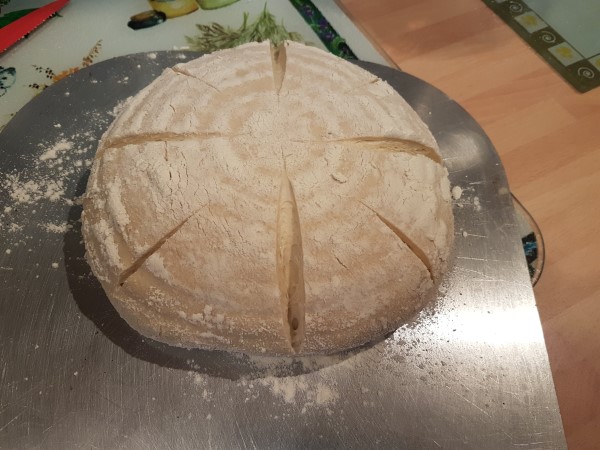 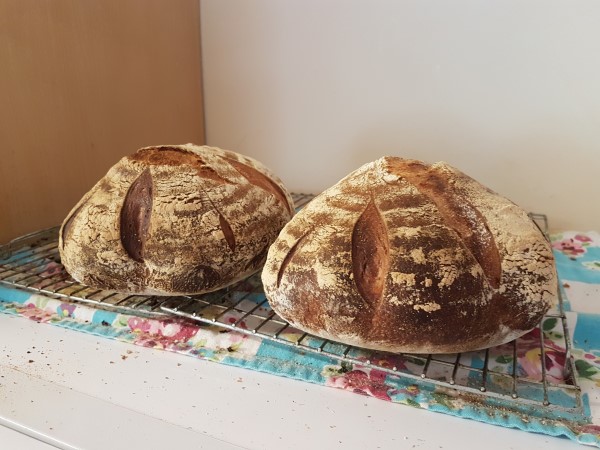 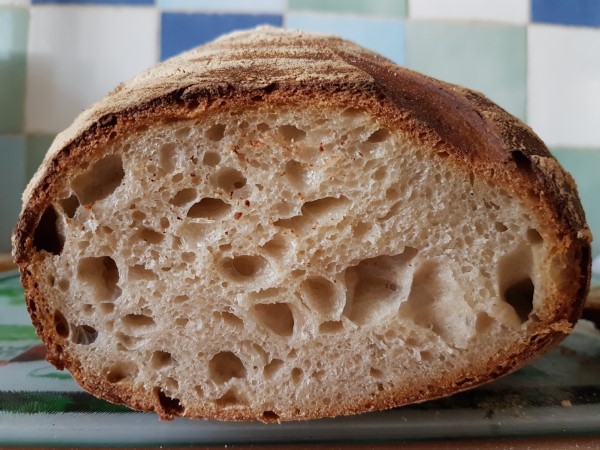 The total time I spent physically involved in the process, over the period from Monday to Thursday, was less than an hour. The rest of the time was spent leaving the dough to get on with things for itself.

So, while it’s true that I needed to be around on Wednesday afternoon, with a bit of fiddling you can fit the bread-making in with whatever else you have going on. I actually spent most of the afternoon gardening and writing. It’s not too precise a method either, an hour or so, either way, is immaterial to the overall result. If you had all day, for instance, you could start in the morning, cut out the fridge rest and bake in the evening.

Now, I can hear you say that you haven’t got a spare afternoon, or any spare time at all. OK, but if you have five minutes in the evening and a few the next morning while you’re doing something else, I have a recipe for that. It’s not a sourdough recipe, it uses yeast, but it still tastes superb. Apart from the time, all you need is an oven and a cast iron casserole dish. If you only have an hour and need some rolls, I have a recipe for that as well. Give up ten minutes and you can make a batch of dough which will keep it in the fridge for up to a week. Just take some of it and bake it when you need it. The truth is, there are so many easy ways to make your own bread that fit in with whatever your schedule is.

Strangely enough, a loaf of sourdough bread, or any that I make, will keep soft for at least a week, longer than most of the mass-produced bread that you can buy, and that contain preservatives! And if there’s any left that’s starting to go hard, it makes brilliant toast, or breadcrumbs or croutons.

As you can tell, I get rather passionate about bread! If anyone is interested in the subject in a bit more depth, whether it’s about additives, or the benefits of sourdough, or in any of my recipes, please let me know and I’d be more than happy to help you out.