Here’s a bit of light entertainment and the basis for my 2016 NaNoWriMo project. I’ve wanted to try an experiment for a while now. I’d noticed some time ago that there seem to be a lot of “Café on the Beach” type books around and I wondered if I could write one set in space, like a sci-fi homage to the genre. The good news is that I’ve finished the story and had very good responses to my beta copy.

Andorra is such a great character, that I can see her having a lot more adventures, in fact, there is a second book, Andorra Pett on Mars, which is now available. The third story, Andorra Pett and her Sister was published in November 2019. 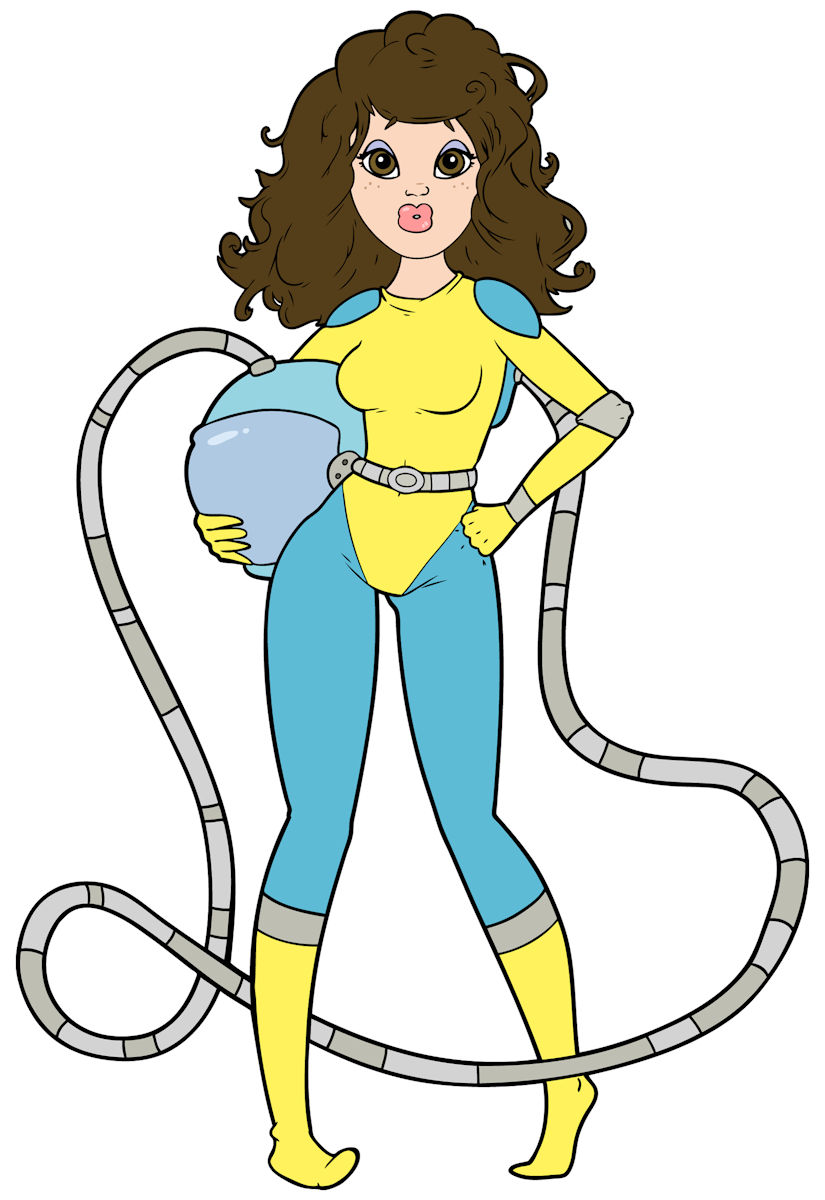 Here’s what the beta readers thought

“I really loved the story line, the plot and the characters.”

“I love the book. I already wrote a 5-star review for it.”

“Andi is a great character and the space station et al is very real.”

“In short, the plot kicks ass.”

The novel was published in June 2017, here’s an early review,

Meet Andorra Pett; with her trusty sidekick, she’s taken over a derelict café. On a mining station. It just happens to be orbiting Saturn!

She’s hoping for a fresh start, away from all the drama of her old life. It’s a chance to relax and start again in a place where nobody knows anything about her or her past.

But the café holds a secret, and secrets have a habit of coming out; whether you want them to or not. And being accident prone doesn’t help. The more you try to pretend that you know what’s going on, the worse it gets.

Andorra’s plans for peace and quiet get lost amid the revelations and skulduggery and she soon realises that the fate of the whole station lies in her hapless hands.

In space, you can still trip over your feet; the question is, will you land upright?

Here are the cover and Chapter one. 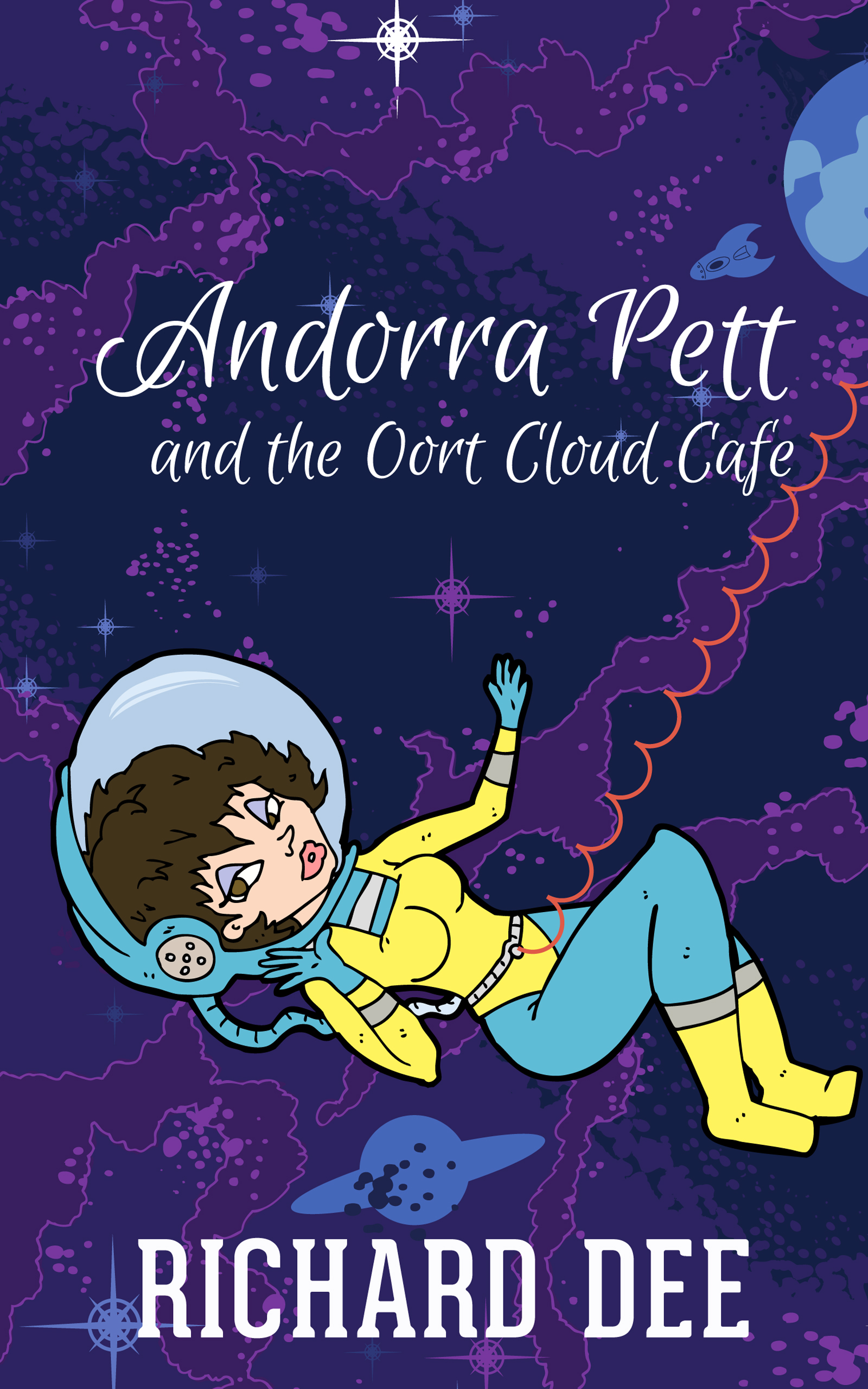 The entrance was in partial darkness, the alleyway behind me dimly lit with flickering tubes. My heels had clicked on the floor as I passed small piles of rubbish and stained brick-effect cladding. The heels didn’t really work here but I was out of my depth and struggling to catch up. Same as the clothes, my designer suit was a little out of place in this riot of grey. It was a splash of colour in a drab working world.

“People don’t come down here much,” explained my guide, the rental agent for the place I wanted to see. I’d forgotten his name and instead thought of him as Mr Greasy. It suited him, his hair was greasy, as were his clothes; even his smile was up there on the grease-o-meter. He probably thought of himself as a ladies man, I know we were out on the fringes but surely not? Maybe a desperate ladies man but I wasn’t desperate. At least, not that desperate. Not yet.

Mr Greasy was still talking. “No-one comes down here much since the new diner opened up.”

I knew where he meant; we had passed it on the way here, next to a pharmacy and a few other shops. The diner looked new, all gleaming chrome and fresh baked aroma. The barista was archetypal, white teeth and blonde hair, a role model for Mr G. Maybe someone would tell him.

He opened the control box and pressed a few buttons on a keypad. The steel security curtain rolled up to reveal a wide window and a door at the side. Faded lettering proclaimed that this was the ‘ucky Strike Bar and Grill’. The ‘L’ had fallen off; there was the faint outline of where it had been. As the mesh rose, dust fell from the links; the place must have been shut for a while.

“What happened to the last owner?”

“There was a change in the law, no booze allowed any more. It kind of stopped him in his tracks. He gave up and walked away, owes me a month’s rent too,” said Mr G as he opened the door, this one had a combination lock. He flicked the light switch; dim red lighting came on, just enough to see tables, chairs and a bar. Everything was covered in dust, there were dirty glasses on the tables and the overhead video screens were blank and cobwebbed. That meant spiders, space spiders! I shuddered, I don’t like spiders.

“The kitchen is out back, together with stores and living space,” continued the sales patter, “a nice master bedroom, en suite.” He leered, “Plenty of room for a little lady like yourself. I’ll show you.”

“Take your word for it,” I answered, not wanting to be in a confined space with him; his breath was probably greasy and, well, I didn’t want to know about his hands. “Are the fittings and stock all included?”

“All the alcohol’s been impounded but everything that’s here is yours for two hundred a month, one month up front.” I had a sudden feeling, like this place was where I was meant to be.

“I’ll take it.” OK, so it wasn’t ideal but to be honest, I was fed up with running. I’d ignored my feelings before and look where that had got me. I might even grow to like the place. Besides, there wasn’t anywhere further to run. We were on the edge of civilisation.

“What you gonna do with it? You can’t open it as a bar and we’ve already got a diner.” It was a fair question, I didn’t really know but I wasn’t going to tell him that.

He moved closer. “Let’s seal the deal then,” he suggested, with a wink.

One of the advantages of being a short shrimp, as my mother used to say, was that you didn’t have to reach down too far to do a man serious damage. I was just contemplating that when he was saved by the arrival of Cy, my friend and business partner, dragging a trolley full of luggage.

Greasy backed off; Cy was larger and less greasy than him. He didn’t know but Cy had no interest in me in that sort of way. Dave was the love of his life, he had left him to look after me, and that made me feel alternately good and bad, they had seemed as happy together as Trevor and I had.

“He’ll wait,” Cy had explained on the trip out. “And if he doesn’t then I can cry into my cappuccino for a while and move on.”

“Pay the man, Cy.” I had decided. “Four hundred and let’s get the gingham bunting out.”

Greasy shook his head. “Gingham! What the hell are you going to do to the place?”

“Maybe the diner needs a little competition,” I ventured; this brought a smirk and a shake of the head.

“Mr Munro can lump it. Shall I tell him or will you?”

He was saved from having to answer by the sight of the money in Cy’s hand. He took the notes, counted them and walked away, chuckling in a greasy sort of way. “I’ll give you a month,” he shouted over his shoulder. I thought that wasn’t too much of an endorsement, considering I’d paid for a month. Or maybe that was what he meant.

“You’re not serious are you?” said Cy as I walked around the tables to the far wall. “We can’t run a café.”

I stopped and turned back to him.

“Why not, Cy? It’s perfect; remember what that bloke said on the shuttle. There’s only one other place selling leisure here, all we have to do is pretend it’s the shop in London, just coffee and cake instead of clothes.”

“Can you bake cakes, Andi?” He had a point; he’d tried my sandwiches once. He reckoned that I wouldn’t be able to do toast without a recipe and a video. I’d show him.

“Yes,” I said with confidence, and then I thought about it, “No… sort of; how hard can it be?” My mum had taught me and she’d never killed anyone.

I turned back and continued to the end wall. I had thought the place was dark, I was about to find out if I could make it lighter.

I had spotted the control for the picture windows all along one wall, reaching over the stained bench seats I grabbed it and turned it. The switch was sticky and resisted but in the end it rotated and with a whir the view was revealed as the shutters went up.

Saturn’s rings in all their glory filled the room with reflected light, the space opened out and the room became more than just a derelict and unloved bar. Even an ‘ucky’ one.

This was now my café, and I was going to make it work. I’d even thought of a name. And Cy was going to help me.

He shook his head. “I just hope you know what you’re doing.”

It’s about time I introduced myself, I’m Andorra Pett, my friends all call me Andi. I’m short and feisty with a few curves and a mess of dark hair. I used to run a vintage clothes shop back on Earth when I was young and still believed in happy ever after. Then there was Trevor, he said I was the love of his life, I believed him too, right up to the moment that I caught him with my soon-to-be-ex best friend Masie. Then I knew it was time to change everything. I raided the accounts, took the money and ran. That was a bit out of character for me, I wasn’t a space hound or even the flying to Spain type.

But, I thought, it’s time to get over it and DO something. Cy, short for Cyril – and don’t laugh – caught up with me and tried to stop me at the port but he ended up coming with me. He said he was looking out for me but I reckoned he wanted a break, the same as I did. Why else would he try to stop me with a suitcase of his own? Cy was my assistant from the shop, a genius with a sewing machine and my confidant. Plus he tended to bail me out when my mouth got me into trouble.

“Won’t you miss Dave?” I asked as we boarded the shuttle up to the orbiting ship, ahead was Mars, then here.

“Maybe,” Cy answered. “But then I’ve always wanted adventure. Keeping you safe should guarantee me that.”

And another review from Amazon 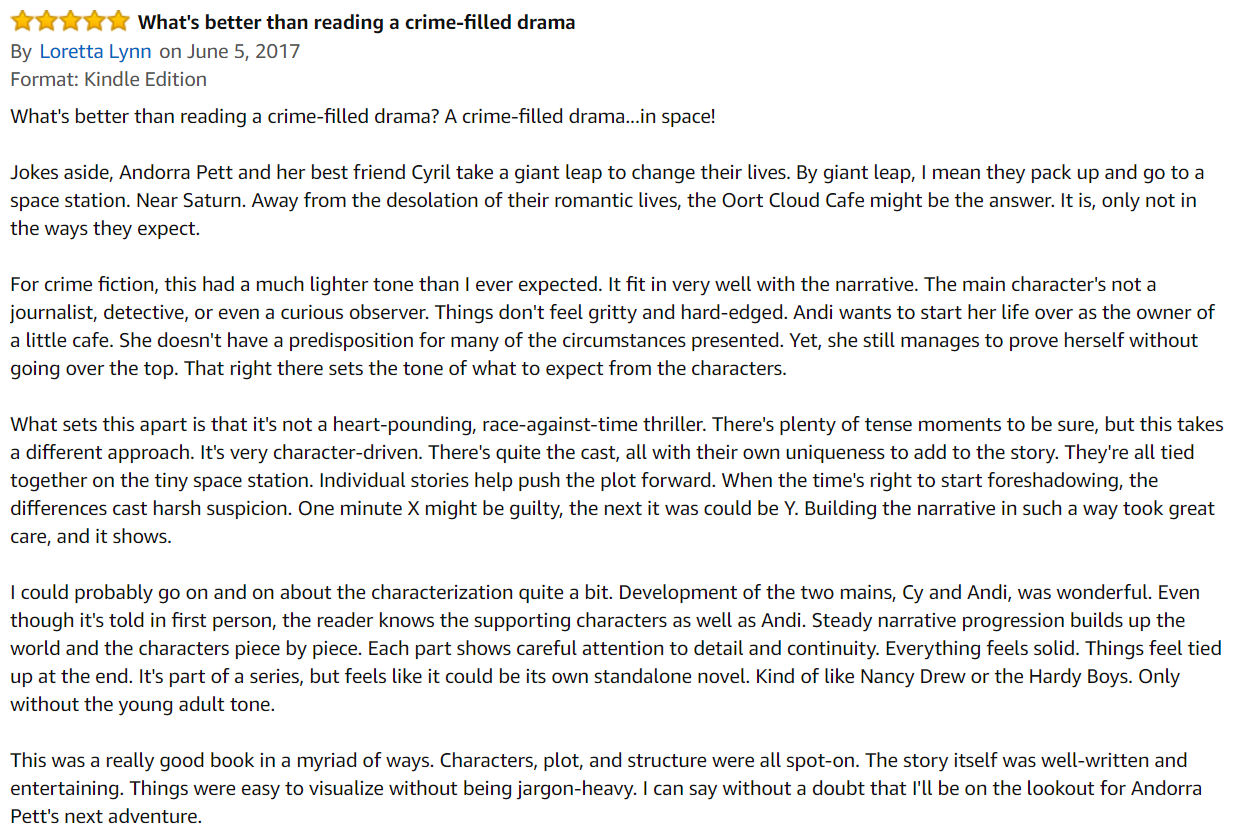